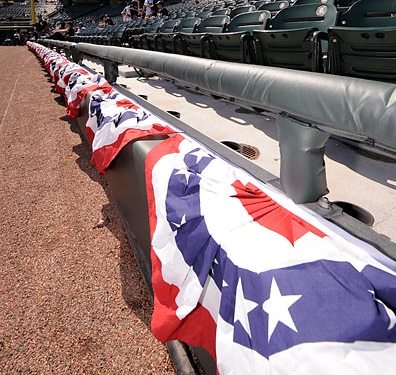 This Sunday begins a new era of Twitter Baseball… the FOUR team era!

Sunday, April 10th at 3:00pm — The MONGOS are the road team against the SCHMOOZERS. The Schmoozers had a great run in last years playoffs, holding off the Mongos while keeping their ace Ryan Clarke on ice in the bullpen most of the play-in game. To open the season, the Mongos look for revenge from that defeat and Paul Bunyan-esque star Scott Schachter has been ready for Opening Day action since early February (if not probably before). Managers Paul Farash of the Schmoozers and Chris Baldassano of the Mongos bring back many old faces, but the integration of new faces will be key to their success this season.

Your opening game of the 2016 Baseball Season!

At the conclusion of that game, your reigning, defending, Twitter Baseball Champion BROS will be the road team against the expansion SOFTBALLERS. There is plenty of talent in that Softballer dugout, but there is so much unknown about the expansion franchise. We do know plenty, however, potentially too much, about the defending Twitter Baseball Champions led by the star battery of Joe Ruiz and AJ Frey. The Bros bring back a deep roster and a winning clubhouse, knowing there is a target squarely on their backs. Bros manager Evan Roberts has his work up against him Sunday facing the relatively unknown Softballer roster helmed by Kristopher Rosario.

So much intrigue, so much excitement.

See you at the park,
Dennis